Idolized by millions of teenaged girls around the world and voted several times as the sexiest man alive, Robert Pattinson told me this morning at an interview at a Santa Monica luxury hotel that although he has accepted his fame,  he is still not in peace with it. 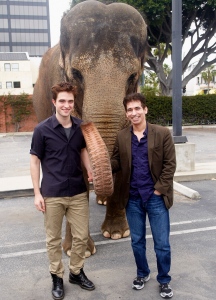 Me and Pattinson with Rosie the Elephant, the star of "Water for Elephants"

He seems to be enjoying the adulation, but the shy Brit feels embarrassed by the excessive attention. The poor guy can’t walk the street without being chased by armies of Paparazzis and throngs of screaming girls.

“Recently, I went to buy a CD at HMV in Oxford street in London. The teller almost fainted when she saw my name on the credit card. She couldn’t even look at me,” he giggles, embarrassingly shaking his head.

Having spent a few months on set with Elephant Kai, Patinson feels more connected to her than to his human fans. “I definitely understood the female Elephant. She seems to be a lot more logical. She likes peppermints and she’ll do some tricks with it, that’s about it. As for fans, I don’t really know how they think at all,” he laughs.

Unlike many other young stars, The 24-year-old actor doesn’t squander his fame in debauchery, drugs and clubs. “All I want is to keep working,” he says.

And that exactly what fame has bestowed upon him. He is actually one of the hottest stars in Hollywood, commanding a 7 figure salary for playing the most coveted roles in the business.

“When you are famous. The quality of the writing  and the projects are better.” he giggles again.

Pattinson invaded the consciousness of humanity in 2005 when he portrayed  Cedric Diggory in “Harry Potter and the Goblet of Fire,” but it was the romantic vampire hit “Twilight,” that elevated him to a favoured pin-up status.

Recently, he has starred opposite Reese Witherspoon in the adaptation of “Water of Elephants,” in which he plays the lead character, Jacob Jankowski, a veterinary medical student at Cornell, who is left with nothing when his parents are killed in a car accident. He drops out and joins a second-rate traveling circus trying to survive the 30s Depression.

Unlike the rest of the cast, Pattinson delivers an impressive and convincing  performance, keeping the teetering film flowing.

“I don’t do much preparation. I just loose myself into my character.” he says.

The idol of millions is not only a pretty face. While not working, he spends his time at home, reading and writing. In fact, he is so unimpressive with the quality of scripts he reads and films he sees that he has formed his own production company to produce his own work

“I used to write a lot of stuff when I was young. The more I read scripts and watch movies, the more I think I can do better than this. so I sit and write, because I want to produce my own writing rather than someone else’s,” he giggles again.

The hard working actor doesn’t even take breaks and still doesn’t know how to relax. “I always feel better working than vacating,” he giggly star says.

His co star, Reese Witherspoon, who was stunned by the amount of attention he gets,  had told me earlier that he was chased by throngs of women wherever they went. “I tried to drag him out for clubbing, but he wouldn’t have any of it,” she says. “He is very quite; reads a lot and watches old movies; works hard and never complains,” she added in wonderment.

Well ladies, you gotta look somewhere else, for Pattinson is not a player! Actually, I am surprised that women want to be with such a gorgeous guy, because his beauty is quite feminine and most likely they gonna look ugly standing next to him.