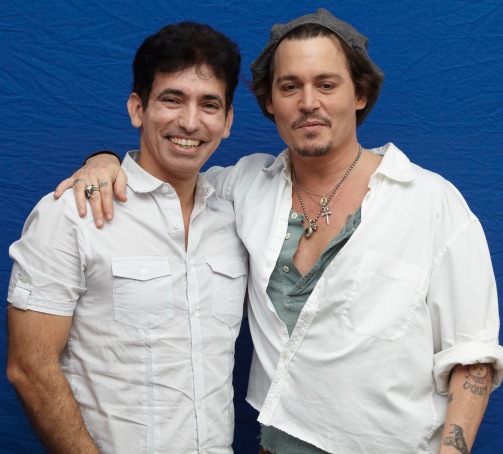 The dismal performance of Johnny Depp’s starrer “Transcendence” in the US box office over the weekend heralded the 4th flop in a row for the Hollywood superstar. The $100 million production opened with just $11 million. The actor’s other movies that failed to deliver in the box office were: The Rum Diary (2011), Dark Shadows (2012) and The Lone Ranger (2013). Has Depp’s star power waned or is he making bad choices?

Directed by Wally Pfister, who shot Chris Nolan’s Inception and the Dark Knight trilogy , “Transcendance” has a high concept and explores pressing issues about our society and the repercussion of its reliance on technology from a new moralistic perspective. Hence, any star, including Depp, is bound to succumb to the temptation of being part of such a promising endeavour, particularly when it’s supervised by Christopher Nolan, Hollywood’s master of “big ideas” movies.

Depp inhabits the character of Dr. Caster, an artificial intelligence scientist whose consciousness is uploaded to the internet by his wife (played by Rebecca Hall) when he is assassinated by a radical anti-Technology group. Soon, his consciousness becomes viral, multiplying uncontrollably and causing havoc to all aspects of daily life.

Reading the script for the first time, Depp was captivated by Dr. Caster’s character. “Dr. Caster is just a sort of a very normal guy, who happened to be a brilliant scientist, but his normal human behaviour was until a certain point,” he tells me when I talk to him at the Four Seasons Hotel in Beverly Hills. “And then it’s about growing within the computer. Regenerating that person back together in the computer and mapping out the times of how old is he now in the computer, how savvy is he, how collected is he? and the ambiguity that is involved.

“So, I wanted people to question whether he was good or whether he was bad. I suppose that was it. I thought there was a great love story in it as well.”

Unfortunately, the love story that he refers to, between Dr. Caster and his wife, was not well served in the movie and fell unconvincingly flat, in spite of the valiant efforts of Hall to feign affection to his ubiquitous fuzzy image on computer monitors.

Artistically the film has failed to deliver, prompting critics to pan it (only 19 percent positive on Rotten Tomatoes). But audiences are often indifferent to critics opinions when it comes to blockbusters like “Transcendance” that provide them with the necessary ingredients for pop entertainment namely a superstar and ample amount of impressive special effects, which begs the question why didn’t they flock to see it?

It has often been stated that since the late nineties, film stars don’t necessarily open movies anymore. Last year alone, we witnessed massive star-studded flops, even the king of summer blockbusters, Will Smith failed to save “After Earth” from from crashing, and hot Channing Tatum and Jamie Foxx couldn’t save “White House Down” from drowning. And one of the biggest duds was delivered by none other than Depp himself in the shape of “The Lone Ranger” which crumbled in its opening weekend.

The executive, however, was proven wrong a few weeks later, when “Pacific Rim,” which boasted some of the biggest giant robots swinging battleships around, sank into an ocean of oblivion like its defeated alien monsters. Evidently, computer-generated monsters and dazzling effects on their own are no longer alluring to an increasingly sophisticated audiences, who demand more than just light and thunder.

Perhaps kids don’t care about stars anymore but they evidently care about their favourite characters. The Marvel Comic-based thriller “Captain America: The Winter Soldier” has amassed a worldwide total of $585.6 million in the last three weeks. Other such sequels and prequels featuring familiar characters made similar splashes in the box office last year too. Most notably “Iron Man 3,” which grossed a whopping $1.2 billion worldwide.

In fact, sequels and reboots seldom lose any money, if at all, albeit they often don’t feature big stars and if they do, they masquerade them in elaborate costumes and suits. Henry Cavill wasn’t well-known let alone a star, but his playing Superman last year did not hurt the box office for the “Man of Steel,” which grossed $668 million globally.

Nonetheless, Hollywood will continue to court stars for its blockbusters, because although they don’t seem to pull audiences in, they certainly push movies out. And it’s still easier to promote and sell a picture with a familiar name on the marquee. The stars have become an insurance policy.

Having witnessed the slaughter of many of their original blockbusters last year, Hollywood studios are gearing up to deluge the market with a flood of sequels and reboots this season, starting with “The Amazing Spider-man 2” this month, followed by “X-Men: Days of Future Past,” “How to Train Your Dragon 2,” “Godzilla,” “Transformers: Edge of Extinction,” “Dawn of the Planet of the Apes,” “Planes: Fires and Rescue,” and “Expendables 3.”

It’s hard to blame Hollywood for embracing familiarity and eschewing originality. After all, Hollywood is a business, and it can’t survive without producing a profit. This year, Sony pictures succumbed to the pressure of its investors and cut its production slate from 25 to 18 movies, due to costly flops last year, such as “White House down,” “Elysium,” and “After Earth.”

In this kind of environment, Warners Bros deserves a kudos for taking the risk in releasing “Transcendance,” and for offering another highly anticipated original “Interstellar” later in the year from director Christopher Nolan. After all, no one can predict the success of movie from the outset, and hence throwing hundreds of millions of dollars at one should not be taken lightly.

And charging Depp with failing to open the movie is absurd, though he admits that playing a role like Dr. Castor, whereby he had to sit in a box and deliver lines in a deadpan face is not his forte. “I feel much more comfortable in comedy but I also feel much more comfortable hiding if you will, because there are more possibilities,” the 50-year-old actor says. “I mean you give the director eight, nine, twelve ways of timings and things like that to go with a scene.”

That was perhaps what his fans were missing in this movie: his charming eccentricity. But they will get that soon in his upcoming caper movie “Mortdecai,” which he seems to be very proud of.

“Mortdecai has something very unique and special,” he enthuses. “It’s very different from anything I have done before. We haven’t seen that type of caper movie for a number of years. So I am really looking forward to that one.”

Who knows whether Mortdecai will resurrect his box-office power or not, but we can all be sure that the next “Pirate of the Caribbean,” sequel, which is currently scheduled for 2016 release, will most likely do.